The Choice Of Solar Inverter

The diversity of buildings will inevitably lead to various solar panel installations. To maximize the conversion efficiency of solar energy while considering the beautiful appearance of the construction, that requires the diversification of our inverters to achieve the best way of solar energy conversion. The most common solar inverter methods globally are centralized inverters, string inverters, multi-string inverters, and component inverters. Now we will analyze the applications of several inverters and this blog post will help you in choice of solar inverter.

Professionals generally use centralized inverters in sizeable photovoltaic power stations (>10kW) systems. They connect many parallel photovoltaic strings to the DC input of the same centralized inverter. Generally, technicians use three-phase IGBT power modules for high power. The lower power uses field-effect transistors and the DSP conversion controller to improve the quality of the generated electric energy, making it very close to the sine wave current. The most prominent feature is the system’s high power and low cost. However, it is affected by the matching of photovoltaic strings and partial shading, resulting in the efficiency and power capacity of the entire photovoltaic system. At the same time, the power generation reliability of the whole photovoltaic system is affected by the poor working status of a photovoltaic unit group. The latest research direction is using space vector modulation control and developing new inverter topology connections to obtain high efficiency under partial load conditions.

On the SolarMax centralized inverter, you can attach a photovoltaic array interface box to monitor each photovoltaic windsurfing string. If one of the strings is not working correctly, the system will transmit this information to the remote controller. At the same time, this string can be stopped by remote control so that the failure of one of the photovoltaic strings will not reduce and affect the work and energy output of the entire photovoltaic system. 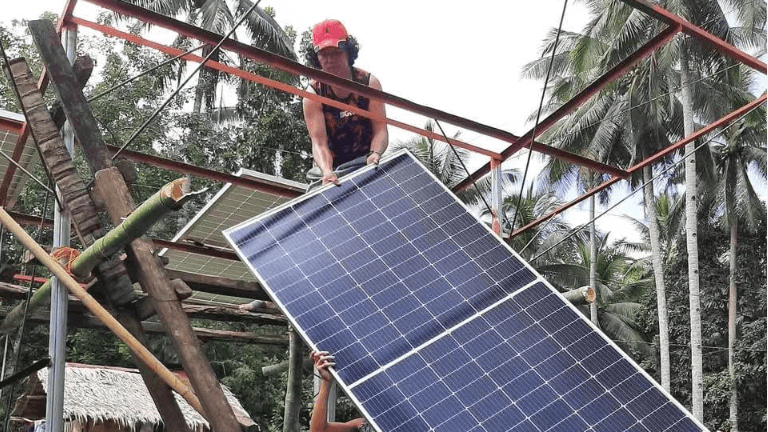 String inverters have become the most popular inverters in the international market. Manufacturers make the string inverter based on the modular concept. Each photovoltaic string (1kW-5kW) passes through an inverter, has maximum power peak tracking at the DC end, and technicians connect it parallel at the AC end. Many extensive photovoltaic power plants use string inverters. The advantage is that it is not affected by module differences and shadows between strings and, at the same time, reduces the optimal working point of photovoltaic modules.

Mismatch with the inverter, thereby increasing the amount of power generation. These technical advantages reduce the system’s cost and improve the system’s reliability. At the same time, technicians introduce the concept of “master-slave” between the strings. When one of the electric energy strings cannot make a single inverter work in the system, several photovoltaic strings are used and connected. One or several of them can work to produce more electricity. The latest concept is that several inverters form a “team” to replace the “master-slave” concept, further enhancing the system’s reliability. Currently, transformerless string inverters have taken the lead.

The multi-string inverter takes the centralized inverter, and the string inverter advantage avoids its shortcomings, and technicians can apply it to photovoltaic power stations of several kilowatts. Different individual power peak tracking and DC-to-DC converters are included in the multi-string inverter. These DCs are converted into AC power by an ordinary DC-to-AC inverter and connected to the grid. Different rated values of photovoltaic strings (such as other rated power, different number of components in each line, different manufacturers of parts, etc.), photovoltaic modules of different sizes or different technologies, and strings of different directions (such as East, South, and West), different inclination angles or shadows, can be connected to a standard inverter. Each string is working at its respective maximum power peak.

The component inverter is to connect each photovoltaic component to an inverter, and each part has a separate maximum power peak tracking so that the element and the inverter are better matched. Usually used in 50W to 400W photovoltaic power plants, the total efficiency is lower than string inverters. Since it is connected in parallel to the AC, this increases the wiring complexity on the AC side. Hence results in complex maintenance. Another issue that needs to be solved is how to connect to the grid more effectively. The simple way is to directly connect to the grid through an ordinary AC socket, which can reduce the cost and equipment installation, but often the safety standards of the grid may not allow it. In doing so, the power company may object to the power generation device directly connected to the ordinary sockets of ordinary household users. Another factor related to safety is whether an isolation transformer (high frequency or low frequency) is required or a transformerless inverter is allowed. Many use this inverter most widely in glass curtain walls.